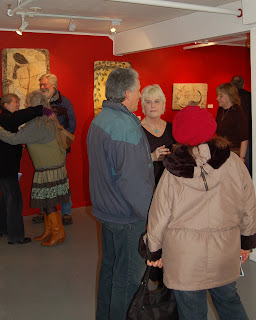 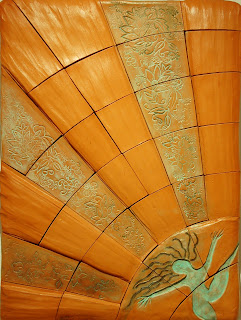 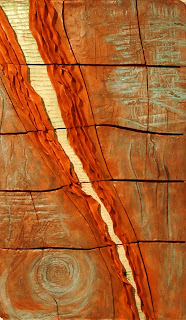 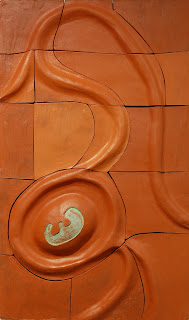 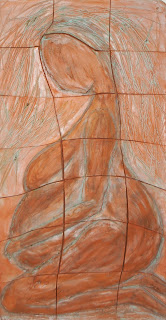 The Gift is rather like a sketch -- a little rough, and somewhat without detail. It captures the essence/feeling of the greatest gift, from its creation to its presentation to the world. The mother is able to communicate with her unborn child in a way no one else can.
I'm so pleased that this piece has found a home with the family of a beautiful new baby. He is their gift, and this work really spoke to them.
All for today.
Posted by katie janyk at Wednesday, February 02, 2011 No comments: 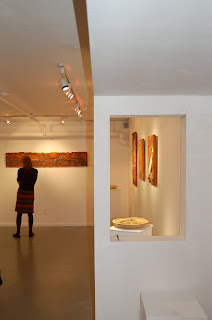 In a quiet moment, before the guests arrive, Michelle checks out Earth Mothers. 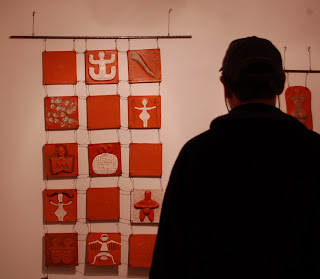 Iconic Patchwork is an interesting piece, in my usually quirky style, comprising tiles depicting various images of The Goddess figure from several different prehistoric and tribal cultures. The terracotta tiles are loosely connected with steel wire; and the 'quilt' hangs on a steel rod. 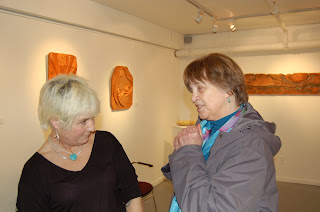 Gibsons Councillor, LeeAnn Johnson, graciously loaned me several books on Goddess history & iconography which taught me lots and inspired some of this work. 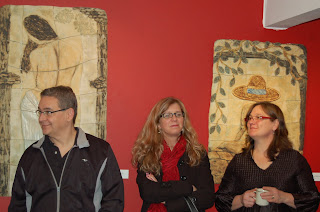 The images behind these guests (Timeless, and Blue Ribbon Hat) also appeared in my "Marking Time" exhibition at the Sunshine Coast Arts Centre in 2010. They were the jumping-off point for my work on the Goddess theme. 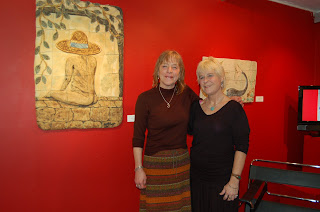 Gallery volunteer, Michelle, was eager to have a photo of us together. As I look at the photo now, it seems appropriate that we 'mature' ladies were standing beside the elder lady in her new hat.
The Opening was a great success for me. I saw lots of old friends, and met many folks for the first time. I sold 2 pieces at the reception, with the promise of more sales to come. More pics to come a little later.
Posted by katie janyk at Tuesday, February 01, 2011 No comments: