As promised, here's an account of our second day of sightseeing.  There is SO much to see and absorb here that two days is only time enough for a brief overview and a couple of highlights; so that was our plan.  Seems to have worked out just fine. 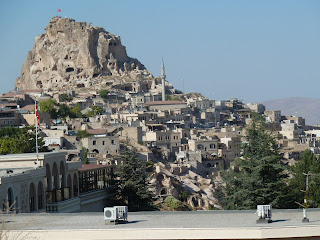 In case you've been having a hard time imagining exactly what üchisar castle looks like, here is a shot of it to put things in perspective.  It truly is a castle built out of the existing rock. 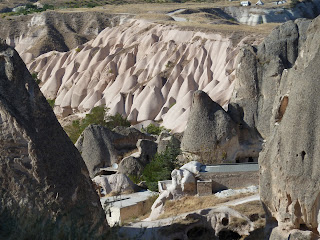 Imagine seeing this while sipping your morning coffee..... There must be something we could learn about sustainable building from this.... 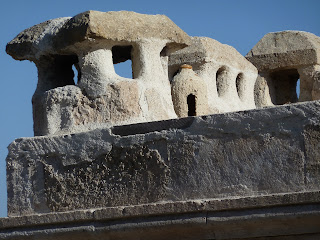 I just love these chimney caps. 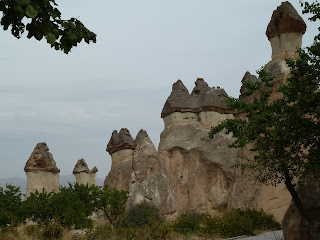 As I said, our second day of touring began with a visit to Pasabag, and the famous Peribacesi, or Fairy Chimneys. It's lucky that Cappadocia is not an earthquake zone, or these fragile-looking formations of tufa and basalt would have long since tumbled into oblivion. 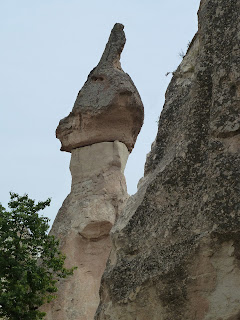 Although people once made their homes in caves in these rocks, they have remained uninhabited since the 1950's at least.  The tufa is rich in silicone dust, which is extremely hazardous to breathe.  Even later houses made of natural stone are whitewashed inside to limit the stone dust hazard.

Following Pasabag, our trusty driver, Ismail, took us the short drive to Göreme and its outdoor museum. The museum is a UESCO World Heritage site, comprising a huge collection of churches carved into the stone. 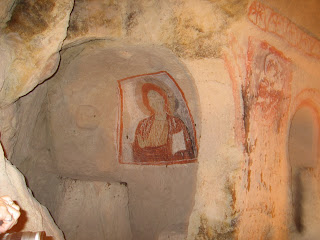 Although these caves are doubtless many thousands of years old, it was not until about the 10th century, when (now Saint) Gregory began the monastic tradition of Christianity, seeing this tucked-away region as the perfect area for quiet contemplation and a simplified austere lifestyle for Christian monks. 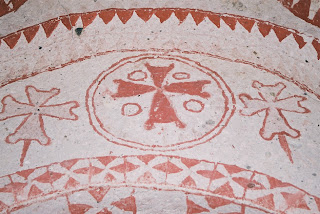 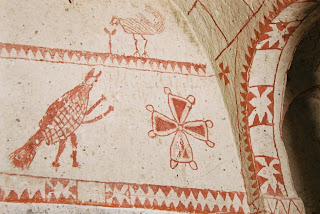 Notice the Byzantine-style cross, chicken, and what appears to be an enormous cockroach...... 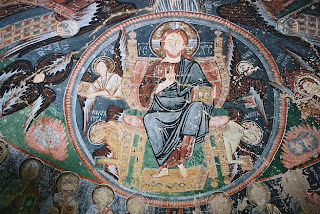 Later adornment was much more complicated, rendered in many beautiful colours.  Several of these frescoes remain in remarkably good condition, thanks to their location in windowless caverns that are rarely visited.

After Göreme, we ventured off to the underground city of Derinküyü.  Above the ground, this community sits on a flat and fairly uninteresting plain of wheatfields, with only one high point to be seen for miles around.  Under the ground, however, is quite a different story.  Initially only one level below ground, the caves are thought to have been permanent homes to the Hittites who lived here a couple of millenia before Christ.  Later, however, the "city" was dug out to at least 5, and perhaps up to 8, levels under the earth, forming a refuge where many hundreds of people could escape the armies and tax collectors of everyone from Ghengis Kahn to the Romans. 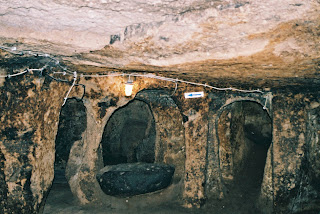 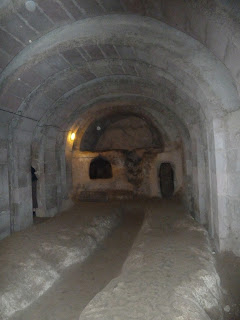 School, anyone?  Students sat on these long benches, while the teacher taught from a raised platform.  At the end of the room is the teacher's sleeping quarters, while the students' dorm is through a small door off to the left. 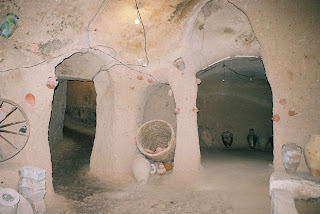 This photo, actually from the neighbouring city of Kaymakli, illustrates some of the vessels used for storage of grain, water, wine, and preserved food. 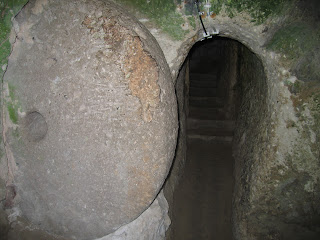 Not wanting company? Just roll this huge stone door across the passageway, lock it into place, and, voila! The peep hole in the centre does double duty as a spear hole, should the visitors prove especially undesirable.
These cities could house hundreds of people for up to a month; although two or three days was the average stay.  Lookouts were posted atop the only hill in the area to warn of approaching intruders, allowing plenty of time for the town's inhabitants to take refuge in the underground warrens.  Air and supplies entered by way of well-disguised and circuitous 'wells'.  Smoke exited similarly, making the location of the populace difficult to pinpoint.  And of course the entrances were well camouflaged. And these folks could well have been some of the first users of composting toilets!
In all likelihood, it was more trouble that it was worth for marauders and passing armies to extract taxes and 'assistance' from these hardy, well-hidden folks.
Our second day of touring ended with a brief visit to Avanos' commercial pottery production zone.  But, I'll leave that for tomorrow's post.........
Posted by katie janyk at Monday, September 26, 2011