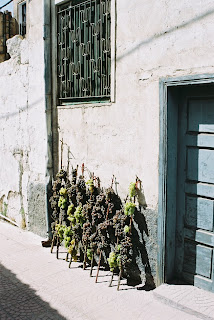 Remember those grapes I mentioned a few days ago? Well, these ones are destined to be raisins. It doesn't take more than a few days in this heat (today it's over 40) and dry air to turn these plump little beauties into sweet raisins. They do have seeds in them, but no one seems to mind. And the grapes that aren't eaten, used for wine, or dried for raisins? 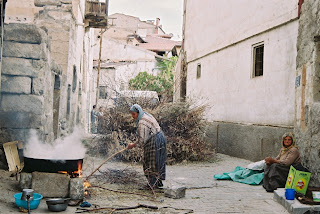 For those ones, it's into the pekmes pot. Starting in the last week of August, piles of sticks begin appearing in little nooks and crannies along the back streets here. As you can see, the piles get pretty big by cooking day(s). In the photo above, the entire street is blocked by the woodpile. But, no matter; it's a little on the tight side for cars anyway. And cars are not nearly as important as pekmes.

The grapes are cooked for ages and ages. They don't get hot enough to get to the jelly stage, and no pectin or sugar or anything is added to them. Rather, the juice is reduced to a thick syrup. Burlap bags are used to strain the fruit mash out, and, voilà: pekmes. It is antioxidant rich, and very yummy. And it is rumoured to fix absolutely every possible ill. All I know is, there is nothing like dipping a piece of warm-from-the-oven french bread into a bowl of pekmes with my morning tea (or priceless filtered coffee).

And now, here are some of the visitors to the studio this week...... 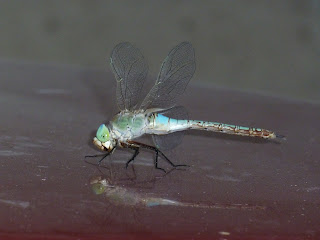 This dragonfly was perched atop the neighbour's car. No water nearby that I could see, but I guess he/she found some. Maybe the river about 1/2 km away? 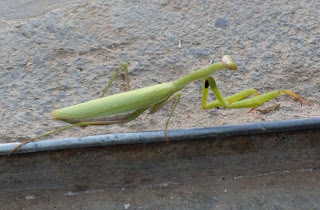 A preying mantis, I believe, though I've never seen one in the flesh, so to speak. This fellow was perched in the studio doorway. He's about 2.5 inches long -- small, compared to the grand-daddy that we had in the studio this afternoon, that was over 3 inches long. I think they're very beautiful things. & totally harmless, if you're not another insect on the menu. But having one fly at you would be pretty disconcerting I'm sure. 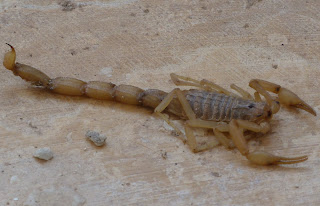 This 3.5 inch guy was kind enough to stop by this morning. Fortunately, he didn't come inside my room, but chose to wait for me out on the patio. I said my hellos, snapped this photo, and sent him on his way. Apparently, most of the scorpions here are not deadly. Their stings just hurt like mad. But they are very quick with their stingers and quite unpredictable; and, deadly or not, poison is poison. So, unfortunately for any Bhuddists out there, he was dispatched.

Interestingly, the residents here in this small place are actually quite urbanized, and don't seem to know much about the 'wildlife'. Often, their first reaction is to squash whatever-it-is. But after much discussion in broken Turkish & broken English, we've established that these critters are in fact very useful. Now, even the neighbourhood kids are flocking around to check out whatever 'Katie abla' (big sister Katie) is looking at with her camera.