In the Studio, 2nd panel 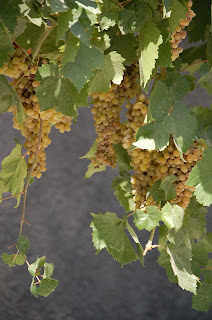 The grapes are ripe, delicious, and plentiful right now. Those that aren't eaten right off the vine and shared with friends and neighbours are dried for raisins, or cooked over open fires in back alleys and gardens, their juice rendered into the thick syrup known as "pekmes". It's great for dipping your fresh breakfast bread, and is thought to cure all manner of ills. I've never seen it in the shops, so I don't know if it's made commercially. But it is an 'institution' in Cappadocian villages. No doubt some of the grapes become wine, which apparently has been made here for hundreds of years. But it looks to me like the locals have much more use for pekmes than they do for wine. 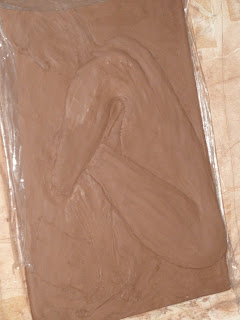 I made the second panel yesterday, with the new clay that arrived at the studio the night before. At less than $100/ton, it's about 1/10th the cost of clay at home. And all prepared by hand (and foot, actually). It doesn't come in nice square boxes, but in one giant sticky, gooey mass which gets unceremoniously dumped on the studio floor on a large sheet of plastic. The studio assistant packs it into plastic shopping bags (valuable things in a Turkish pottery) of about 50 lb each. It is a hefty process, much better than a half hour of weight training at the gym, lifting and dropping each bag onto the marble floor to smash out the bubbles and get the blob into something resembling a cube, so it can be cut into the slices used to make the panel grounds.

My second panel began in the usual way, and after a couple of hours looked like the picture above. It then went from that, 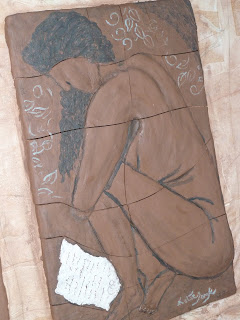 to this. All that remains is to cut out the excess clay from the back of each tile, and, when it's a little drier, brush off the excess stain to soften the look a bit. 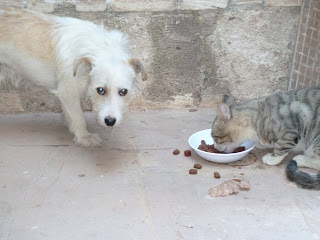 Mercimek the studio dog had an unexpected guest for dinner this evening. "I know sharing is caring; and I really don't like this "dog food" stuff much anyhow -- but, really, isn't this going a bit far? Whose cat is this, anyway? & who invited it to dinner?"
Posted by katie janyk at Monday, August 23, 2010