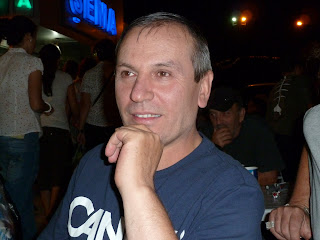 A less-than-flattering pic of the Studio owner, Erdogan Guleç. Erdogan is now in his mid forites, and has been working with clay, like his father and grandfather before him, for as long as he can remember. He is a kind and gentle man, and a patient teacher. It is his method of panel construction that I have been using for several years. 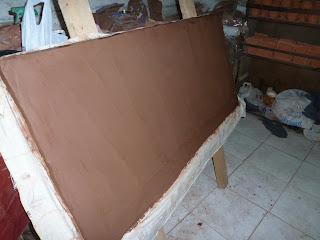 There is about 70 lbs of local Avanos clay in this, the base for my first panel. No worries here about diligent wedging, or about bubbles in the clay (of which there are many). Just smash the roughly packed bag on the floor a few times (hefty work) to smash the bubbles and get the clay into a roughly oblong shape so it can be cut into layers about 1/2 inch thick and placed on the board. Then about 2 hours' worth of smacking and whacking, a little rolling, and a whole lot of smoothing to achieve a workable surface. The panel is then tightly covered in plastic for a few hours before the rest of the work begins. 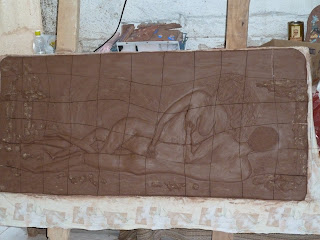 I had to work very quickly, since the air here is so dry, and had to keep the edges, especially the top one, tightly covered with strips of plastic to keep the moisture in. By the time I was finished (maybe about 8 or 10 hours) the bulk of the sculpting, I was covering all but the small area on which I was working at the moment...... a bit of a problem maintaining the proportions because I wasn't viewing the whole piece at once. Size 42 chest, size 2 feet. But no worries... After a bit of a giggle, I fixed it up to my liking. Then the piece was cut into tiles.

Following this photo being taken, some stain was applied and the work was again wrapped for the night. Next day, being yesterday, I began the tedious process of carving out the excess clay from the back of each of the 66 tiles. I finished that this morning, and then brushed off the excess of the stain that I had applied as a wash the day before. We'll see how it all turns out. As they say here, "Inshalla" -- it's in the hands of the gods now. In this heat, we could be firing in 2 or 3 days, rather than the 2 weeks I usually leave things to dry at home. 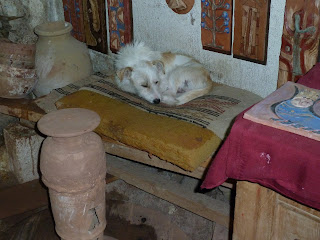 Mercimek (say "mare-j'mek -- it means split pea soup), the studio dog, in his usual place on the potter's wheel seat. He's a bit miffed 'cause we just gave him a bath..... 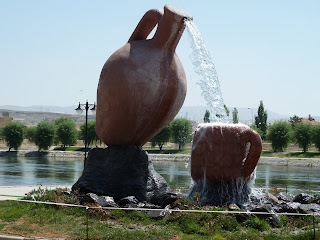 Avanos is keen to honour its clay and pottery tradition, as evidenced by this new fountain erected by the municipality on the (also new) riverside walking path. A process of 'beautification' has been going on for the past 3 or 4 years here. A bit of gentrification is happening in the old town, but its character remains essentially the same as it has for who-knows-how-many years.

There have been humans in this area since the stone age, and inhabitants have been working with clay for more than 4,000 years. The people here are a resilient and independent bunch, making this a region of relatively stable politics and somewhat 'enlightened' non-fundamentalist religious practice. Honour is paramount for Turkish people; and I have found the residents of Cappadocia (& Avanos in particular) to be tolerant, generous and welcoming.