Oh, that Cappadocian landscape. There really is no other like it anywhere in the world. This small panel, "Cappadocia #1", is one of four small pieces depicting various elements of this landscape that moves me so much.

"Balikçil", literally, means "fisher", which is, of course, what herons do best. There aren't any herons right around Avanos, since there aren't any marshes. The river is probably too fast flowing to be very attractive to any wading birds. There are, however, within an hour's drive, some beautiful marshlands (very salty) with abundant birdlife and other swamp-dwelling critters. Besides.... I just like the shape of herons. 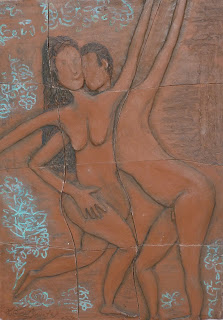 "Benimle Dans" means "Dance With Me", which pretty much tells it all for this one. 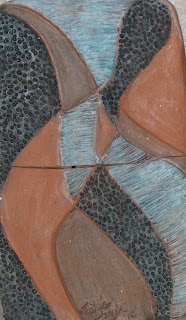 "Dansöz" means Dancer. This little abstracted dancer is one of 6 similar pieces that play with shape, texture & relief. The colour is really only intended to emphasize the texture of the various spaces. 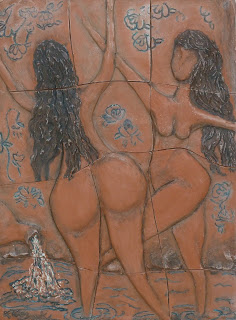 There's a lot of dancing going on in this post......
"Kadinlarin Irmakta Banyosu" is called "Bathing Ladies" in English. The actual translation from Turkish would be "ladies bathing in the river". When the piece was first done, another Avanos potter commented that he could remember when, as a child, he watched as Avanos women did laundry down at the edge of the Kizilirmak (whose waters were then clean enough to drink). When the washing was done, they stripped off their own clothes and bathed in the clear waters.