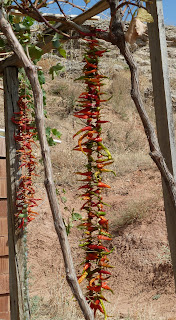 Peppers hang all over town these past couple of weeks. At the Friday market, the air around the red pepper vendors is heavy with the pungent aroma of slightly over-ripe fruit. Strings of red & yellow & green peppers in all shapes and sizes hang in windows, from lamp posts, on clotheslines, on tree branches -- anywhere available. The dried peppers, and stuffed pickled ones of the familiar large red variety we know so well, are a winter staple here, where the temperature hangs below freezing for much of the time between November and March. 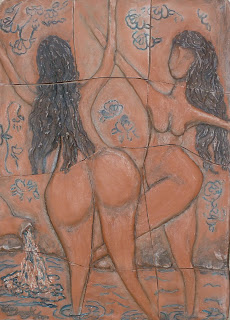 The first set of panels is fired, assembled, and sealed. In these photos, they don't look too much different than they did before firing. But there is in fact a big difference in the clay colour. The terracotta fairly sings with energy, and contrasts nicely with the black outlines & highlights. 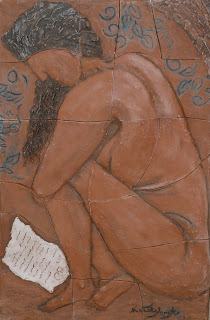 A lot of unseen work went into these first panels, since I had to "fix" the blue accents after the pieces were fired. (All the blue fired to black.) It was a somewhat tedious process that took the better part of an entire day. But I'm happy with the results. 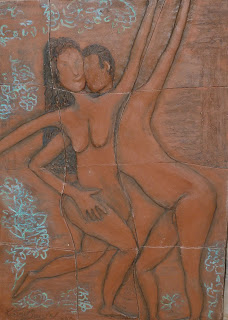 The small abstract panels on which I "fixed" the colours looked pretty horrid at first. But, with a little (a lot, actually) brushing to remove unwanted oxidation, they turned out pretty much as I had originally hoped they would. So, one set of pieces saved from disaster. Whew! 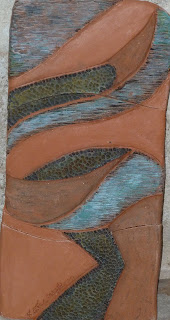 Saturday was spent cutting out the backing wood, and mounting the tiles onto it with silicone. It's not what is generally used here; but I'm used to it, I like the wiggle-room it gives during the mounting process, and it remains flexible when dry. These backing pieces are not very thick, so I was a bit concerned that bending of the back could cause cracking of the panels or lifting of the tiles if a hard glue was used.

After the tiles were mounted on the boards and dried overnight, I sealed them, since they aren't glazed. At home, I would use a sealant designed for stone floors. Here, I used what everyone else uses. It's called "Lef Lef", and it's actually for shoes! Why anyone would want shoes with a shiny plastic-y finish is beyond me; but, it works great for the clay. It's non-toxic, the shine-level is easily adjusted with water, and it gives a very satisfactory finish when dry.

More pics tomorrow. All for today.
Posted by katie janyk at Monday, September 20, 2010