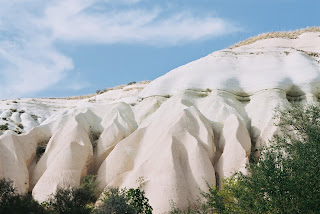 Since I only have a couple of panel pictures today, I thought I'd start off with some shots of the incredible landscape in this area. This first photo is of rock formations in the Rose Valley, so named because of the pinkish tones of some of the rock. 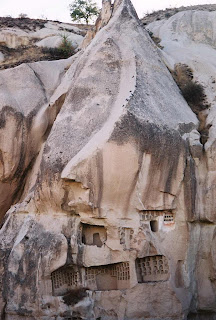 These landscapes have been the inspiration for my small abstract landscape panels. This photo shows the dovecotes built in about the 10th Century by Christian monks who lived here. It was Gregory (now St. Gregory) who chose this region to establish sites for spiritual contemplation and growth, thus beginning the Christian monastic tradition. The rugged landscape afforded some protection from persecution, and the soft volcanic rock is easily carved out, providing ready housing, as well as storage, churches, and the dovecotes pictured above. The plentiful rock doves (aka pigeons) provided the fertilizer for grapes which the monks made into wine. 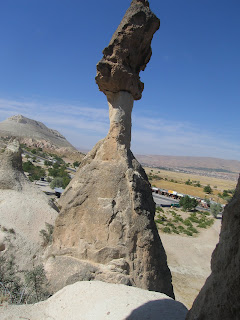 There is a volcano at either end of the Cappadocian valley, and there have undoubtedly been several others at some point. The 'fairy chimneys', as they are known to tourists, are volcanic tufa, which is a soft igneous rock containing a lot of limestone. It carves easily when damp, and hardens quite well once exposed to the air. Although people actually lived in these formations until very recently (and some diehard shepherds & such still do), living in them is now discouraged, since the walls, because they are not sealed, continuously shed fine silica dust. Lung disease, particularly among the women, who spent virtually all their time in the home, was rampant among residents of cave houses. So the Turkish government provided compensation for residents to relocate. However, the main building material in the area is still the same silica/limestone rock. And, as I have mentioned before, most older houses have caves for storage, and many many artisans use caves for their workshops. & they seem to be pretty healthy. In any case, they all smoke so many cigarettes here, that silicosis is probably not their greatest health risk. 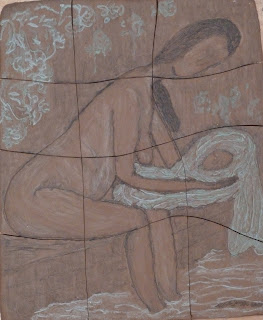 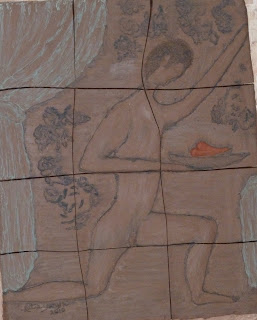 To whom is this fellow presenting his heart? We can only guess. I hope she's worth it.......

The firings will begin tomorrow, and I'll post photos of the kiln etc when we load it.